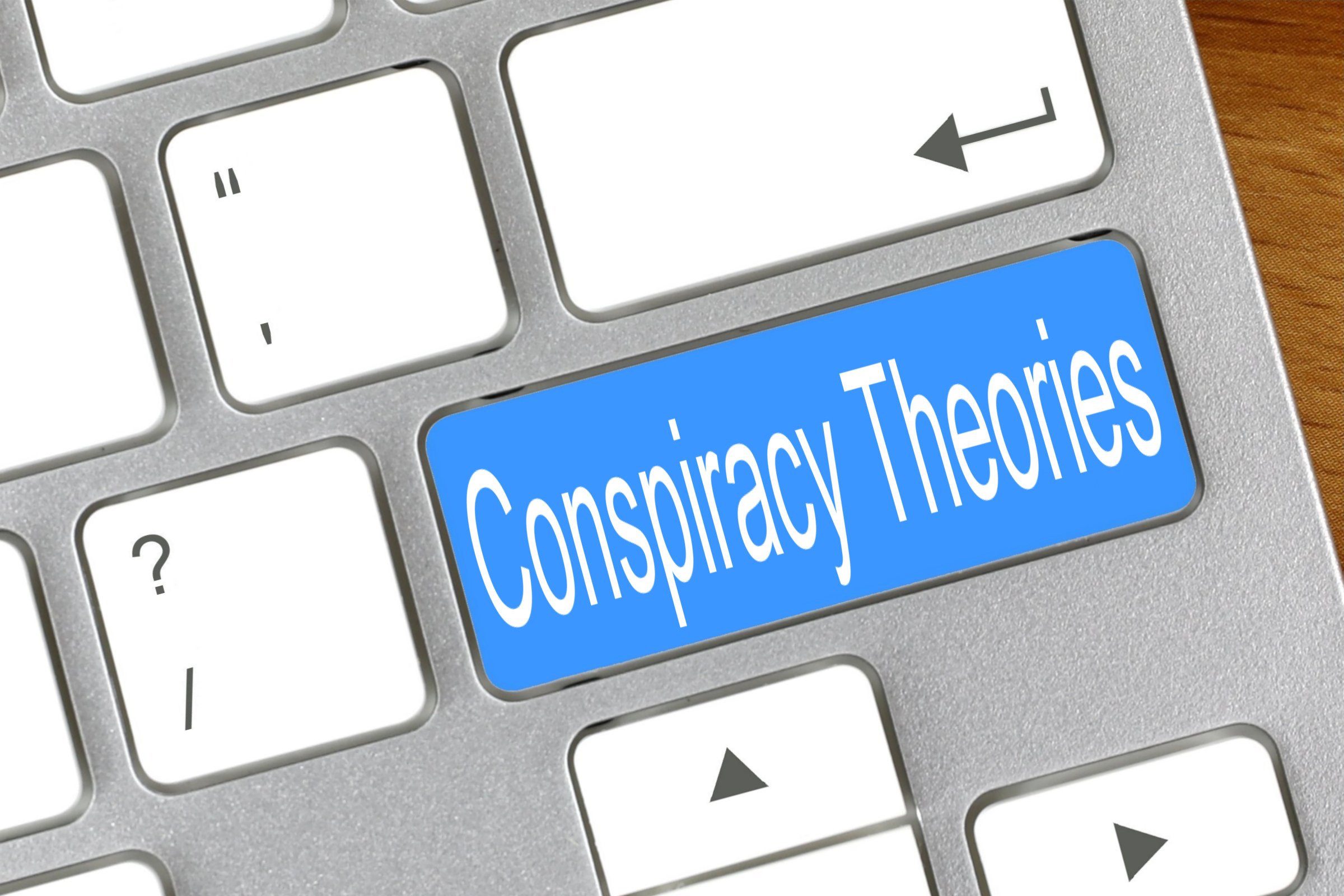 A mission to recruit Nazi war criminals? CIA mind control experiments? A President trying to steal important documents? These might sound crazy, but they are just a few examples of conspiracy theories that were actually true! Let’s talk about conspiracy theories and more on this episode of Thinking in English!

Plot (n) – a secret plan by several people to do something that is wrong, harmful, or not legal, especially to do damage to a person or government

The police stopped a plot to assassinate the president

Life is full of uncertainties

Sociopolitical (adj) – used to describe the differences between groups of people relating to their political beliefs, social class, etc

Evildoer (n) – someone who does something evil

The government has blamed the protests on a handful of evildoers

Obscure (adj) – not known to many people

He moved to an obscure island in the Pacific

Blatantly  (adv) – in a way that is very obscure and intentional, when this is a bad thing

It was blatantly obvious that she was telling a lie

He accused the men of covering up a crime

Their affair caused a scandal in the office

You have almost certainly heard of conspiracy theories before. And, if you’ve never heard the term ‘conspiracy theory,’ you definitely know what they are! A conspiracy theory is the belief or argument that there is a plot between multiple people to secretly control and manipulate a situation or commit crimes! When the reality is unknown, scary, and perhaps unbelievable, people all across the world find comfort in believing that a villain is responsible for creating secret plans. Over the last few years, they have entered mainstream discussions, played influential roles in worldwide politics, and are all over the media.

In particular, conspiracy theories about the Coronavirus, and the vaccines and medications to treat the illness, have developed in large numbers. People don’t like uncertainty; they don’t like not having simple or certain answers. This is why conspiracy theories appear during crises – they offer a simple, easy to understand explanation for a complicated and potentially unanswerable problem. They also provide people with a feeling of control. If there is a problem, we want to know how to solve it. However, this is not always possible or likely. Conspiracy theories tend to offer simple answers to complicated problems. For example, where did Covid-19 begin? We don’t know for sure. The answer is probably impossible to know anytime soon, but mixed messages from different countries have provided perfect oppotunities for conspiracies to flourish – such as it came from a Chinese laboratory or is caused by 5G. If you believe 5G causes Covid, then the way to cure the illness is easy – get rid of 5G.

Conspiracy theories, at least in the large scale form we are used to, probably followed the invention of the Gutenberg press in the 1440s. For the first time it was possible to quickly print books and other media at a large scale. Usually conspiracy theories are strongest at times of sociopolitical problems and uncertainty. Behind most conspiracies is a fear that a vast and covert network of evildoers exist and gather in secret, plotting to do evil. This fear has been present in almost every moral panic over the last 400 years: the Salem witch hunts of the 1600s, the Nazi’s anti-Semitic conspriacy theories, McCarthyism in the US, the Satanic Panic of the 1990s, QAnon, and the Coronavirus.

Conspiracy theories are often seen as just simple legends, or even ridiculous. The fake moon landing? Planes releasing chemicals into the sky? The world being controlled by a secret organisation of lizard people? These are all conspiracies that people believe – and they sound crazy. But in some areas and some circumstances, conspiracy theories have significant power and influence. Particularly in the USA over the Trump presidency, once-obscure ideas were being talked about by the leaders of the country. Social media has also made spreading misinformation significantly easier. Blatantly absurd ideas are very attractive on the likes of Facebook and twitter. Old and ridiculous conspiracy theories – like the idea of powerful people kidnapping children to drink their blood – have kept evolving and reproducing throughout history.

However, as you may have guessed from the title, some ridiculous sounding conspiracy theories have actually turned out to be true. Now, I’m not saying that powerful people drinking children’s blood is true – it is not. It’s a stupid idea. But some other conspiracies have turned out to be true! Here are a few of the most famous examples.

You may have heard of the Watergate scandal. About 50 years ago, a group of men broke into the Democratic National Committee’s headquarters (the leadership of the US Democrat political Party) in order to photograph and copy campaign documents. They did so on the orders, or with assistance, of the serving President of the USA, Nixon. Looking at confidential documents and plans from the Democratic Party would have really helped Nixon and his Republican party. After the men were caught, the Nixon administration attempted to cover up its involvement, which eventually led to the President’s resignation.

Another conspiracy theory that was actually true is known as Operation Paperclip. Have you heard of it before? The Nazi party were a horrific organisation who did an uncountable number of terrible things. Their scientists and engineers built terrifying weapons, tortured Jewish prisoners, and worked for one of the most evil regimes in history. When the war ended, most of the Nazi political leaders were imprisoned or executed. But, what happened to the scientists? They did terrible things, but they were undeniably some of the most intelligent in the world and had learned many new things during their experiments and tests. Operation Paperclip refers to a secret US mission which brought 1,600 German scientists, engineers, and technicians – many of whom had ties to the Nazi Party – to work for the government. Why? To give the US an advantage in the Cold War!

Not every scandal or conspiracy theory has to do with government, or important political matters. Sport has also had conspiracy theories. Match-fixing, in sport, is the action or practice of dishonestly determining the outcome of a sports match before it is played. For example, agreeing to lose a game on purpose. One of the most famous sports conspiracy theories revolves around match-fixing: the Blackbox scandal. This is an old one. In 1919, eight members of the Chicago White Sox baseball team deliberately lost the World Series against the Cincinnati Red in return for payment. The result was a public trial and permanent bans from baseball for everyone involved!

The CIA, the USA’s intelligence agency, has been involved with thousands of conspiracies around the world: assassinating world leaders, smuggling drugs, funding criminals – they’ve done it all. One of their most infamous conspiracies is known as Project MKultra. What was MKultra? A mind control program! Lasting about 20 years, MKultra was a way for the CIA to experiment on human subjects, often without them knowing. There were numerous different experiments, including using chemicals, electric shocks, hypnosis, isolation, physical and sexual abuse, and most famously giving the psychedelic drug LSD to people without them knowing. The experiments were intended to test new interrogation methods and make it easier to manipulate subjects. A number of well-known individuals were subject to testing: including the American poet Allen Ginsberg who was given drugs during experiments at Stanford University; Ken Kesey, the author of One Flew Over the Cuckoo’s Nest; and allegedly Ted Kaczynski, the American domestic terrorist known as the Unabomber who spent 200 hours as part of a Harvard experiment.

This was not the only time experiments were done on innocent people. Perhaps the worst example in history was the Tuskegee Syphilis study. This trial, conducted between 1932 and 1972, observed the natural progression of the disease syphilis in black men in the US. The men thought they were receiving free healthcare, but in fact they were not getting any treatment – they did not know that they were part of a trial.

All of these examples show that sometimes, the truth can be stranger and crazier than you may think!

JOIN THE CONVERSATION CLUB  — https://www.patreon.com/thinkinginenglish NEW YOUTUBE Channel!!! – https://www.youtube.com/@thinkinginenglishpodcast ENGLISH CLASSES – https://thinkinginenglish.link/ TRANSCRIPT – https://thinkinginenglish.blog/2023/01/25/why-did-jacinda-ardern-resign-as-prime-minister-of-new-zealand/ Jacinda Ardern, the well-known Prime Minister of New Zealand, has resigned after five years in the job. From mass shootings and Covid-19, to having a baby in office, Ardern dealt with many issues and became popular around the world. Today, let’s discuss why Ardern resigned as Prime Minister while learning some new vocabulary. INSTAGRAM – thinkinginenglishpodcast (https://www.instagram.com/thinkinginenglishpodcast/)  Blog – thinkinginenglish.blog YouTube – https://www.youtube.com/@thinkinginenglishpodcast Vocabulary Anti-vax (adj) – Opposing or refusing vaccination. Many anti-vax activists believe that vaccinations are dangerous Progressive (adj) – Favouring or advocating progress, change, improvement, or reform, especially social or political reform. The progressive movement has been pushing for greater social and economic equality Deputy (n) – A person appointed or elected to act as the substitute or representative of another. The deputy mayor will be in charge while the mayor is away on vacation. To criticise (v) – To express disapproval of; to find fault with; to judge adversely; to censure. The critics were quick to criticise the new play for its lack of depth Empathy (n) – The ability to understand and share the feelings of another. The therapist showed empathy towards her patient who was going through a difficult time To applaud (v) – showing approval, praise or admiration through actions or words. She was applauded for her response to the crisis, as many felt she handled it with grace and poise Handling (n) – The action of managing or dealing with something or someone. The  handling of the crisis by the government was criticized by many experts. Enough in the tank (phrase) – Sufficient amount of energy or resources to complete a task or maintain a particular level of performance. I'm feeling good today, I think I've got enough in the tank to run this marathon — Send in a voice message: https://anchor.fm/thinking-english/message Support this podcast: https://anchor.fm/thinking-english/support