135. The End of Winter Sport?: Climate Change and the Future of the Winter Olympics! (English Vocabulary Lesson) 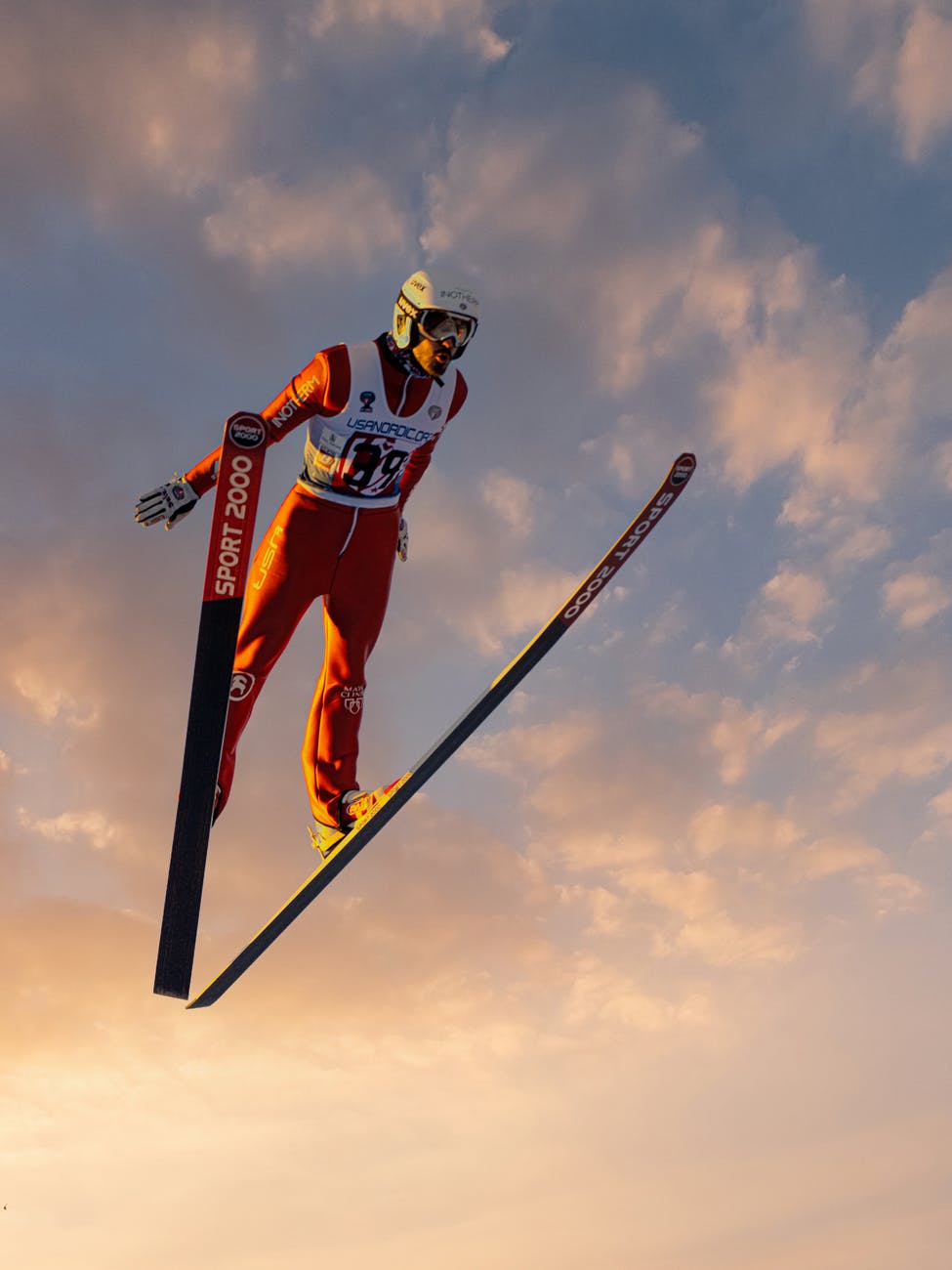 The Beijing winter Olympics are currently in full swing, but there is no snow falling from the sky. Over the next few decades, climate change and global warming will cause major problems for the future of winter sports. Is it the end of the winter Olympics? Let’s discuss it on today’s episode of Thinking in English!

Sarah did a phenomenal presentation during yesterday’s meeting

Artificial (adj) – made by people, often as a copy of something natural

He refuses to wear clothes made of artificial fabric

Reliably (adv) – in a way that can be trusted or believed

Unstable (adj) – not firm and therefore not strong, safe, or likely to last

It is a poor and politically unstable country

The court decided that the police response was suboptimal

Viable (adj) – able to work as intended or able to succeed

I’m afraid your plan is not financially viable

The 2022 winter Olympics is well under way, with athletes from around the world competing in events ranging from alpine skiing and snowboarding, to figure skating and ice hockey. While the Beijing Olympics has been notable so far for phenomenal athletic performances and the controversy over China’s human rights abuses, there is one thing that has been largely missing – natural snow.

A Winter Olympics Without Snow?

Beijing in the winter is undoubtedly cold – reaching down to minus 15 degrees Celsius on the most freezing days. Yet, cold temperatures do not mean it snows regularly. In fact, the region around Beijing tends to only have two or three days of precipitation (which could be rain or snow) in the month of February. That doesn’t sound like enough snow to host skiing and snowboarding? events, right?

Despite this, the slopes of the Yanqing course just northwest of Beijing are covered in bright white snow, and playing host to the world’s best skiers and snowboarders. How is this possible?

However, Beijing is the first city to pretty much exclusively use artificial snow. China’s snow making technology is so advanced now, that the lack of snow has not actually been an obstacle to hosting the games. Beginning in November, the organisers have been constantly producing snow and have machines able to create the perfect snow conditions for different events. There are now 100 snow generators and 300 snow-making guns working all day to keep the snow in perfect condition.

Artificial snow has allowed the Olympics to guarantee consistent conditions. At the same time, artificial snow is a sign that the perfect conditions for winter sports are getting rarer and rarer.

Climate Change and the Winter Olympics

Even though Beijing is the first Olympic city to rely on artificial snow, it will certainly not be the last. According to a new report, climate change and global warming are going to seriously threaten the future of winter olympics. Already, ski resorts around the world have begun closing more often as mountains have unreliable snow and frequent rain.

Global warming has caused average temperatures to increase around the world. Moreover, winters are warmer quicker than summers, and the colder cities are warming faster than hot cities. Over the next decades, and in the context of the warming world, perhaps only a few cities will be cold enough to host winter sports.

Why will global warming threaten the Winter Olympics?

There are quite a few different reasons. First, as I mentioned already, the number of cities able to host the Olympics will be vastly reduced! 21 different cities have hosted the competition since the first in Chamonix 1924. Experts are now predicting that out of those 21 cities, only 10 will be able to reliably host the Olympics in 2050. Venues in France, Austria, and Norway are now considered to be ‘high risk’; Squaw Valley in the US, Vancouver, and Sochi are seen as ‘unreliable.’

Second, the quality of snow may cause problems for athletes and even prove dangerous. Snow is being replaced by rain, and where it still snows the amount is decreasing. Snow machines produce artificial snow, but according to freestyle skier Laura Donaldson such snow can quickly turn into solid ice and lead to increased injuries. Whereas natural snow is about 90 percent air and 10 percent ice, artificial snow is up to 30% ice. Natural snow is also being negatively affected by the changing climate. Mushy snow and changing ice will make winter sports difficult.

Third, athletes are losing places to regularly practice on real snow.  Unstable winter conditions and the decline in snow conditions make it difficult for athletes to get enough practice in before major tournaments. Already, injuries are increasing due to lack of practice and inexperience. According to Philippe Marquis, a two-time Winter Olympian from Canada, “Athletes feel the urge to push their limits even if the conditions are suboptimal.”

Furthermore, it also means that it will be more difficult for new athletes to get involved and learn the sport. Winter sports are already expensive, but in the future they get even more expensive and exclusive. As snowfall becomes less consistent, ski resorts are struggling to stay open and needing to spend more money to operate. Winter sports will soon be limited to only the richest and most elite people. There will be a smaller talent pool from which to select the next generation of Olympic skiers, skaters, and snowboarders!

This will not just lead to a lack of future athletes, but also a reduction in future fans. Without being able to directly experience the sport, fans may be less likely to get interested in the sport and follow the professional events.

Is Artificial Snow the Saviour?

Is artificial snow the saviour of the winter Olympics? Climate change increases the need for artificial snow machines both in professional competitions and even in recreational resorts. Is this a viable solution?

Well, the issue is that artificial snow can be harmful to the environment. Making snow requires a lot of energy and a lot of water. Without sustainable sources for this energy and water, artificial snow will contribute to already existing climate and environmental problems. It is also incredibly expensive – the Beijing Winter Olympics have cost upwards of $3.9 billion!

Artificial snow doesn’t necessarily solve every problem. Beijing is extremely cold, which allows for the artificial snow machines to be extremely effective. Yet this will not always be the case in every winter sport venue. As temperatures increase, snow will begin to melt faster than artificial machines can operate. 12 years ago the organisers of the Vancouver Olympics were faced with an abnormally warm winter. Their artificial snow machines were not able to keep up with the melting snow, which forced Vancouver to use trucks and helicopters to deliver snow from other regions.

The winter Olympics are under threat. This episode of Thinking in English has tried to show how the changing climate seriously jeopardises the future of the tournament. Rising temperatures and decreasing snowfall makes winter sports less reliable, more dangerous, and may reduce the number of future athletes and fans.

Do you think climate change will cause the end of the winter Olympics? Let me know in the comments!

10 thoughts on “135. The End of Winter Sport?: Climate Change and the Future of the Winter Olympics! (English Vocabulary Lesson)”

JOIN THE CONVERSATION CLUB  -- https://www.patreon.com/thinkinginenglish NEW YOUTUBE Channel!!! - https://www.youtube.com/@thinkinginenglishpodcast ENGLISH CLASSES - https://thinkinginenglish.link/ TRANSCRIPT - https://thinkinginenglish.blog/2023/01/25/why-did-jacinda-ardern-resign-as-prime-minister-of-new-zealand/ Jacinda Ardern, the well-known Prime Minister of New Zealand, has resigned after five years in the job. From mass shootings and Covid-19, to having a baby in office, Ardern dealt with many issues and became popular around the world. Today, let’s discuss why Ardern resigned as Prime Minister while learning some new vocabulary. INSTAGRAM - thinkinginenglishpodcast (https://www.instagram.com/thinkinginenglishpodcast/)  Blog - thinkinginenglish.blog YouTube - https://www.youtube.com/@thinkinginenglishpodcast Vocabulary Anti-vax (adj) - Opposing or refusing vaccination. Many anti-vax activists believe that vaccinations are dangerous Progressive (adj) - Favouring or advocating progress, change, improvement, or reform, especially social or political reform. The progressive movement has been pushing for greater social and economic equality Deputy (n) - A person appointed or elected to act as the substitute or representative of another. The deputy mayor will be in charge while the mayor is away on vacation. To criticise (v) - To express disapproval of; to find fault with; to judge adversely; to censure. The critics were quick to criticise the new play for its lack of depth Empathy (n) - The ability to understand and share the feelings of another. The therapist showed empathy towards her patient who was going through a difficult time To applaud (v) - showing approval, praise or admiration through actions or words. She was applauded for her response to the crisis, as many felt she handled it with grace and poise Handling (n) - The action of managing or dealing with something or someone. The  handling of the crisis by the government was criticized by many experts. Enough in the tank (phrase) - Sufficient amount of energy or resources to complete a task or maintain a particular level of performance. I'm feeling good today, I think I've got enough in the tank to run this marathon --- Send in a voice message: https://anchor.fm/thinking-english/message Support this podcast: https://anchor.fm/thinking-english/support

10 thoughts on “135. The End of Winter Sport?: Climate Change and the Future of the Winter Olympics! (English Vocabulary Lesson)”