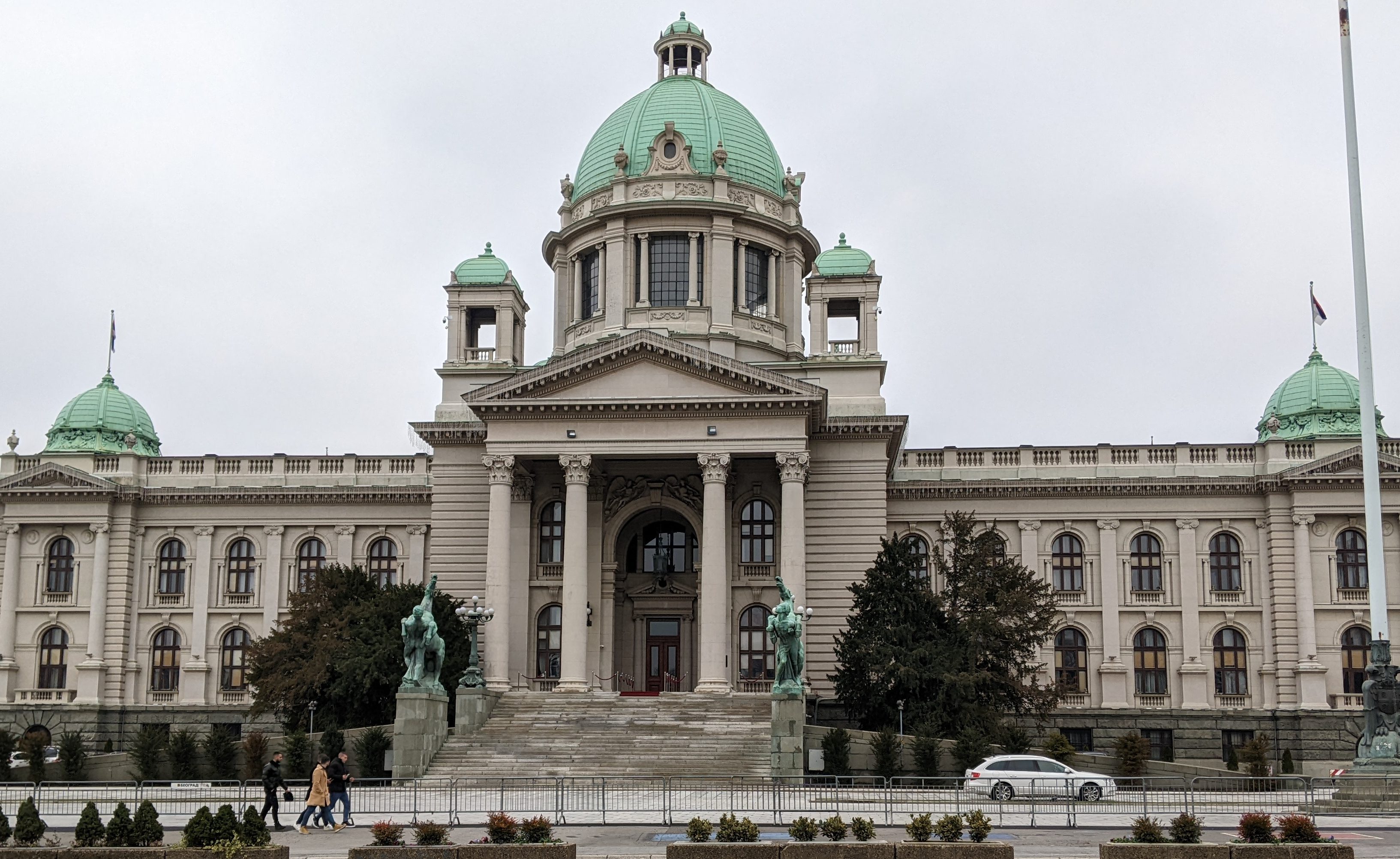 Have you ever been to the capital city of Serbia? Thomas Brock, our resident travelling English teacher visited recently. He has written a detailed account of visit in the latest entry of Thomas’ Blog! Read, learn some new vocabulary, and practise English!

“The museum-goer was bemused by the abstract art exhibit.”

Trek: A long and difficult journey, especially on foot

“The trek to the summit of the mountain was a gruelling experience.“

Stout: Solidly built and sturdy, not easily moved or pushed over

“The stout oak tree stood tall, despite the storm.”

Flurry: A sudden and brief burst of activity or excitement

“The market was in a flurry of activity before the holiday.”

Meander: To follow a winding or indirect path or course

“The river meandered through the countryside.”

“The project was plain-sailing until the final stages.”

Venture: to risk going somewhere or doing something that might be dangerous or unpleasant

“She ventured out into the city, despite her fear of getting lost.”

Aesthetically: Relating to the appreciation of beauty or good taste.

“The new building was aesthetically pleasing with its modern design.”

Denominations: a unit of value, especially of money

“It always takes time to get used to the different denominations of coins when you go to a foreign country.”

Vibrant: Full of energy and enthusiasm, lively and striking

“The vibrant colors of the sunset were breathtaking.”

Spooky: Frightening or mysterious in a way that makes one feel uneasy

“The abandoned house had a spooky atmosphere.”

Dilapidated: In poor condition as a result of age or neglect; run-down and decaying.

A cold weekend in Belgrade!

Last weekend I travelled through Serbia for the first time in my life. I was travelling from Montenegro to Bulgaria, via Belgrade, the capital of Serbia. I will write about my time both in Montenegro and in Bulgaria, but first I wanted to write a bit about my experience staying in Belgrade. Or Београд in the local Serbian.

I began my journey at 0800 at the bus station in Budva. The Budva bus station hosts a lovely local restaurant, along with a café that has a garden filled with a selection of animals. Rabbits, peacocks, ducks and geese are just some of the animals there.

After being bemused by the local miniature zoo, I boarded my bus and began the twelve hour trek across the Balkans, all the way to Belgrade.

First we actually had to get to the Serbian border, high in the mountains, past Podgorica, Montenegro’s capital, past Kolasin, a ski resort, and past the snow-covered pines of the Montenegrin landscape.

I hadn’t yet seen much snow this winter, but after only an hour of driving we were already stepping into a winter wonderland. Towering pines and stout little Christmas trees lined the roads. Flurries of snow fell periodically as we meandered our way up the windy mountain roads.

The journey was mostly plain sailing, except for at one moment when we came across a landslide that had covered part of the road. This meant we had to disembark from our coach and walk across the muddy stream to change into a new bus.

Whilst I was a little anxious at first due to the lack of many English speakers, I was reassured by the young man to whom I’d lent a euro for the luggage store. He told me what was happening in English and all was clear.

We crossed the border after a short wait and we were into Serbia.

We swapped the snow-covered mountains for more gentle hills. Whilst not unpleasant, the scenery in South Serbia was unspectacular. I noticed the number of mosques in the towns and villages that lined the roads we drove along.

After a brief stop around 1800, just enough time for the dull afternoon to turn into total night, we were on the move again. The next thing I really saw, except for watching my team, Newcastle United play football on the bus Wi-Fi, was the city lights of Belgrade itself.

As we arrived at the city bus station it was raining, and with my vaguely-remembered instructions from the hotel owner I set out to find the tram that would take me to where I needed to go.

I found the place easily enough, but had to ask a very kind 24 hour shop owner to share her wifi so I could inform the hotel staff of my arrival. It was simple enough and once I was checked in I ventured out for food. From here I began to enjoy Belgrade thoroughly.

I went to an ATM and marvelled at the aesthetically pleasing banknotes and the high denominations thereon. I peered through windows into cool bars and cute restaurants. After a short while I settled on a 24 hour, by-the-slice pizza place; it was delicious.

The next day I awoke to what is perhaps my most significant impression from Belgrade: greyness.

The sky was grey, most of the buildings were grey. The windows, the walls, the pavements and roads. Grey. I don’t think this is a criticism of the city, because I think there is a distinct charm in the dulled look of Belgrade.

The first place I walked to was a farmers market. It was vibrant and busy, bustling in fact. There were all kinds of foods, meats, fruits, vegetables and local delights. There were also souvenirs and tools, DIY equipment, clothes and household goods. There were artists and craftspeople selling their wares. It was great!

I spent most of Sunday (the only full day I had) walking through the many streets of Belgrade. I stopped in cafés in the morning and bars in the afternoon. I saw most of the landmarks and tried to soak up some atmosphere.

One thing I found myself noticing was how quiet the city was. Perhaps it was because it was Sunday, but then most places were open. The city wasn’t full of cars. The roads are wide and there seems to be a good bus and tram network – perhaps that was the key to the lack of noise.

The city was not busy with people either. The locals were friendly and kind, and I was even mistaken for a local myself once or twice. After a trip to the castle and to the bus station to buy my ticket to Sofia, I headed back to the hotel via some more bars.

Belgrade has many parks and most streets are lined with trees. I think the city would look very different in spring, summer, and autumn. As it was, I visited in the midst of the winter and it was really quite cold.

The grey cloudy afternoon turned into a misty, foggy evening. It was kind of spooky, but very imposing. In want of an early night and after the excellent first impression from the night before, I returned to the pizza place for two slices this time. They did not disappoint.

And with that my visit had almost come to an end. On Monday morning I awoke, checked out and made my way back across the city, this time trying to see a few more places I hadn’t seen the day before.

Apart from my pizza, the food was all tasty but unremarkable. The things that stuck out were the trendy cafes and bars, the interesting architecture, the mix of styles, and the atmosphere. The other main thing that I remember is the street art, or graffiti. It really added some colour to the otherwise dullness of Belgrade.

I think Belgrade is a city of many colours, just most of them are grey.

At last it was time to say bye-bye to Belgrade and board a bus once more, this time for Bulgaria. As I left the city and crossed the countryside, I noticed the dilapidated state of the city’s suburbs and of the towns and villages we passed. Whilst not uncharming, the Serbian countryside is not imposing. Distant, cloud-covered hills provided some interesting scenery until once again darkness fell, and I awaited my arrival in Sofia.

Have you ever visited Belgrade? If so, what did you think of it?

What was the best city you ever visited? Why did you like it?

What is your capital city like? Is it unique?

Do you have recommendations for places I should visit next?

What is your favourite city to visit?

Hi I'm Thomas and I'm an English language teacher and editor. I teach English to adults from all over the world. I focus on written English and on conversational English. I also edit written English in a number of different fields and areas. When I'm not teaching I'm travelling as much as I can, cooking new dishes, and trying hard to play and watch sports.

Christmas in the UK (Thomas’ Blog)