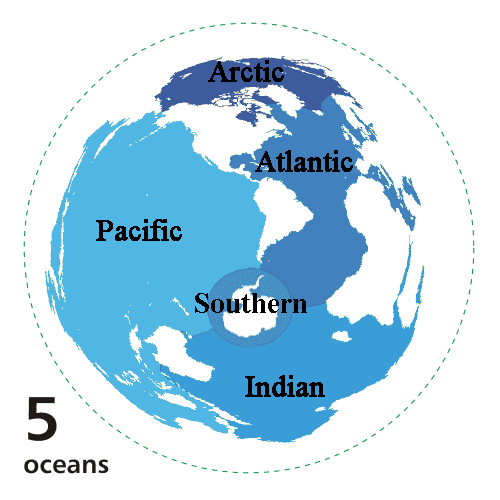 How many oceans are there? And how many continents are there? While at first you might think these are quite simple questions, the answers can depend on where you come from and what you believe! Hopefully, by the end of today’s episode, you’ll know why there are not simple answers to these issues.

Continent (n) – a large land mass surrounded, or mainly surrounded, by the sea and usually consisting of various countries

Scientists believe all humans originally came from the African continent

According to (preposition) – as stated by

According to our records you owe $150 to the bank

To encircle (v) – to surround something, forming a circle around it

The house is encircled by a high fence

Misleading (adj) – causing someone to believe something that is not true

Commercials must not create a misleading impression

What is the body of water called between the UK and France?

There is some discrepancy between the two bills

The schedule isn’t set in stone, but we should stick to it closely

Earthquakes are caused by the movement of tectonic plates

How many oceans are there? How many continents are there? Right now, you might be thinking these are simple questions. Everyone learns these answers at school, right? Surely this is going to be the shortest podcast I have ever recorded… I’ll just say the answer and end the episode. Well, as you may have already guessed, the answers to these questions are not quite so simple. In fact, the answers to these questions may change according to where you grew up!

Let’s start with the question, how many oceans are there? Depending on whom you ask, the answer is one, four or five! This issue has actually been in the news earlier in the summer. Why? Well, if you look at the maps of the National Geographic Society, an American research and conservation organisation, a new ocean has appeared. The Southern Ocean, encircling Antarctica, is now considered to have the same status as the Arctic, Atlantic, Indian, and Pacific Oceans. However, the term ‘new’ ocean is a little misleading, because that body of water has existed for around 30 million years. So, why have the National Geographic Society decided to update their maps? And why is there still a debate over how many oceans there are? And who decides?

The truth is that all of the Earth’s oceans are part of one large interconnected system. You can sail from the Arctic Ocean, though the Antarctic, Southern, Indian, and Pacific Oceans before returning to the Arctic without having to cross land. It is only humans, and our mapmakers, that divide the Earth’s water into zones including oceans and smaller seas. These oceans are usually surrounded by entire continents (we’ll come back to continents later). In the places where two oceans meet, scientists must decide where the boundaries of the oceans exist.

For political reasons, this is often more complicated than it sounds. It is actually common for bodies of water to have multiple names: the one between Japan and the Koreas is known as the Sea of Japan in Japan, the East Sea in South Korea and the Korean East Sea in North Korea. As individual countries have their own departments for naming seas and oceans, creating maps, and determining borders, there are often discrepancies and arguments over these issues. For this reason, the International Hydrographic Organisation (IHO), which has 94 countries as members, tries to settle the arguments over different oceans, names, and maps.

The new definition of the Southern Ocean which the National Geographic Society adopted includes most of the water that surrounds Antarctica. It extends up to an imaginary line called the “60th parallel south,” which is roughly where the cold water of the Antarctic meets the warmer subantarctic waters. The waters found in the Southern Ocean are much colder and less saline (salty) than those of the southern Atlantic, Pacific and Indian Oceans. This has allowed an ecosystem of special and unique organisms to flourish, including krill, penguins, seals, whales and albatrosses. For this reason, many countries, organisations, and scientists already use the five oceans model used by the National Geographic Society.

So, how many oceans are there? According to most scientists and governments there are five: Arctic, Atlantic, Indian, Pacific, and Southern. According to the IHO, there are only four. And in reality, all of the oceans are connected and defined by humans, so maybe there is actually only one large ocean!

The next question is similarly debated: how many continents are there? Continents are generally understood to be large, continuous, distinct masses of land, ideally (but not necessarily) separated by expanses of water. However, there is no strict criteria to define continents, and instead uses a combination of geography, history, culture and even politics to define continents. Therefore, when you ask the question, how many continents are there?, the answer is not set in stone. The answer depends on where you grew up.

The continent model I learnt at school, and probably the most widely adopted model, is that there are seven continents: Africa, Europe, Asia, North America, South America, Australia (or Oceania), and Antarctica!  If you come from a southern European country like France, Italy, or Spain, or if you come from Latin America, you probably learnt at school that there are six continents: North and South America are combined into a single continent! Parts of Russia, Eastern Europe, and Japan sometimes teach that there are six continents as well, but they combine Europe and Asia into the single continent “Eurasia.” The Olympics use a five continent model: combining the Americas and excusing Antarctica as no one lives there. That is why there are five rings on the Olympic flag and logo!

As you can see, there is a lot of debate over how many continents there are! If we were to use a stricter definition or criteria, then perhaps we would think there are only four continents. This is because Europe, Asia, and Africa are actually all connected by land. So perhaps they could be seen as one super continent! Moreover, only 200 years ago some people argued that there were only two continents: the Old (Europe, Africa, Asia) and the New (the Americas)!

Clearly, the definitions we use to determine continents are not just based on geographic fact. What splits Asia and Europe? If we think about the massive country of Russia, it is generally considered to be part of Europe more than Asia. The Ural mountains are seen as separating Asia and Europe. However, the only reason this is the case is because the Russians wanted their great cities of Moscow and St Petersburg to be in Europe! Sometimes people try to define continents based on tectonic plates, but historically this was never a consideration and nearly every continent contains multiple plates. Politics also doesn’t matter: Hawaii is part of the USA but in the continent of Oceania, while Greenland is controlled by Denmark but is not European.

Ultimately, and similar to the ocean questions, the answer depends on who you ask. It depends on where you come from, what you learnt at school, and what definition you believe in. As I said, the most common definition at the moment included seven continents, but you can easily argue that there are just six, or five, or four! And if humans live for long enough, we might even be around to see new continents millions, or billions of years in the future. Our continents are drifting about 2.5 cm per year!

On this episode of Thinking in English, I tried to answer two surprisingly complicated geography questions: how many oceans are there? and how many continents are there?  As I tried to show, there are no definite answers to these questions and instead it depends on where you come from and what definition you believe. So, what do you think? Tell me how many Oceans, and how many continents, you learn about in your country!