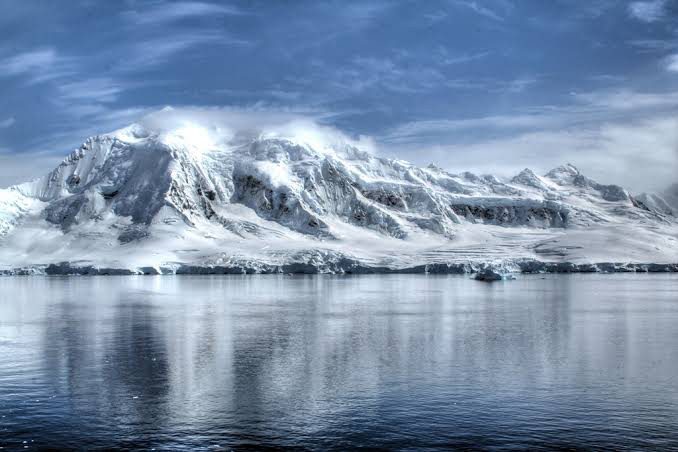 Antarctica is one of the most unique parts of our planet, it is full of natural resources, and is increasingly important for economic and strategic reasons. But, who owns Antarctica? Let’s talk about it on today’s episode of Thinking in English!

95. The World’s Strangest Time Zones!: What are time zones and why are they so weird? (English Vocabulary Lesson)

The American Great Plains are a broad expanse of grassland

Precipitation (n) – water that falls from the clouds towards the ground, especially as rain or snow

Rain, snow, hail, and sleet are all types of precipitation

To converge (v) – if lines, roads, or paths converge, they move towards the same point where they join or meet

The paths all converge at the main gate of the park

To prohibit (v) – to officially refuse to allow something

Motor vehicles are prohibited from driving in the town centre

They asserted their claim to citizenship

Try and imagine a perfect society, a utopia, in which the government really got everything right

Contentious (adj) – causing, involving, or likely to cause disagreement and argument

She has some very contentious views on education

Pristine (adj) – original and pure; not spoiled or worn from use

The car seemed to be in pristine condition

A few weeks ago I recorded an episode talking about the oceans and continents of our planet. Go check it out if you haven’t already – it will be linked in the description! In that episode I mentioned that different countries and organisations have different ideas about how many continents there actually are on our planet. The continent model I was taught at school, and probably the most common around the world, is that there are 7 continents: Africa, Antarctica, Asia, Australasia (Oceania), Europe, North America, and South America. Out of these 7 continents, Antarctica stands out as the odd one out.

Antarctica is the highest, coldest, driest, and windiest of all continents. In fact, Antarctica is actually a desert. When I think of a desert, I normally have an image of wide expanses of sand, scorching heat, and bright sun in my head; but this is not always the case. A desert is usually defined by levels of precipitation. And in Antarctica, it very rarely rains or snows. If, on the rare occasion, it does snow, the snow is not able to melt and over 45 million years has built up to become large and thick layers of ice. For this reason, Antarctica holds most of the world’s fresh water: experts estimate that between 60% and 90% of the planet’s fresh water is locked into the ice of Antarctica. If all of the ice in Antarctica was to melt, then global sea levels would rise around 60m. Unfortunately for use, the continent is also one of the most rapidly warming areas on Earth. Over the past 50 years, average temperatures across the region have increased by 3°C (37.4°F), five times the average increase on Earth.

Moreover, Antarctica is unusual for some other reasons. For example, there is no Antarctic time zone. In the episode I recorded on ‘time zones’ (also liked in the description so make sure you listen!), mentioned that our time zones are broadly based on  imaginary lines stretching from the north pole to the south pole. However, as all of these lines converge at a single point in Antarctica, what time do they use? Most of Antarctica experiences 6 months of non-stop daylight in summer and 6 months of constant darkness in winter, which makes it even more confusing for deciding time. Scientists generally use the time zone of the country they are working for – but this can be confusing when two research stations close together might be using very different times. Another unusual thing about Antarctica is that every direction is north. Technically, this is only true at the South Pole, but it makes it difficult to talk about East and West!

But, who owns Antarctica? I just mentioned the scientists from numerous countries who work on the continent, but who gave them permission to be there? Right now, you are probably sitting on a chair at your desk, commuting to work on the train, or walking your dog while listening to my podcast. Wherever you are, however, you are on land. And that land is owned by someone – your government, a company, your bank, maybe even you own it yourself. Almost all land is owned by someone. Unless you are in Antarctica. The simple answer to the question “who owns Antarctica?” is no one: Antarctica is a continent with no owner and no government. It is the only place on the planet where the land isn’t officially owned by anyone! Instead, the continent is governed by the Antarctic treaty, adopted in 1961.

The 53 countries that have agreed to the Antarctic treaty have agreed to work together to keep Antarctica peaceful and free from weapons, in return for being able to conduct research on the land. The Treaty prohibits military bases and weapons testing, requires information to be shared between researchers from different countries, prohibits nuclear explosions and waste disposal, and does not recognize any country’s claim on territory. That last point is particularly important for our question: the Treaty which governs Antarctica does not say who officially owns the land. Argentina, Norway, Australia, France, the UK, and Chile all claim to own parts of the continent, but as they have all signed the Antarctic treaty they do not act upon these claims!

This treaty is an interesting political experiment. In theory, Antarctica is a large continent with no owner, and the freedom of scientific research and international cooperation in a peaceful environment is the basic idea. As Antarctica is so isolated, and almost everyone there is doing basic scientific research, there aren’t too many international disagreements. However, when there are disagreements, it can be difficult to work out a solution without a government to decide.

The entire population of Antarctica is there for the purposes of science. Klaus Dodds, a geography professor at Royal Holloway, University of London, whose specialty is the geopolitics of Antarctica, points out that “The 1959 Antarctic Treaty is fundamentally based on freedom of scientific investigation, and the Treaty has worked because each party by and large respected the rights of others to conduct scientific research.” It is the only continent where people work together for peace and science. Moreover, the Antarctic treaty has influenced the way that countries approach space exploration. Like Antarctica, space is treated as a place for international cooperation and scientific research – it is not like other places on Earth where whoever finds it (or conquers it) owns the land!

It may sound as if the system is utopia… but there are problems. There are numerous geopolitical tests ranging from environmental challenges to economic conflicts that pose issues for the Treaty system. The Antarctic Treaty Consultative Committee, which meets annually, is supposed to deal with problems but rarely tackles the most difficult issues. The most contentious issues tend to be associated with the growing strategic and economic interests in Antarctica, such as tourism and fishing. More countries now have decision making powers over the region, which makes it far more difficult to keep the region conflict free. We have a saying in English – too many cooks spoil the broth. And Antarctica is a perfect example – the Treaty was originally designed for less than 15 countries to govern the territory; there are now 29 countries with decision making abilities. This higher number makes governing more difficult, not easier.

China’s active role in Antarctica has been seen as a demonstration of the problems in the region. China has been accused of trying to limit activities close to its research bases: which is against the spirit of cooperation on the continent. Also, they began building their fifth research base before it was fully approved which is in violation of the Treaty. However, as there is no government, there is no way to punish countries for breaking the Treaty which is a major weakness in the system!

China and other countries like the USA and Russia are already beginning to prepare for a future without the Antarctic treaty. There is an environmental review planned in the year 2048, which could lead to some key provisions (like the ban on mining) being changed or loosened. Antarctica is full of natural resources. It is full of rare minerals and metals; it is the largest reserve of freshwater on the planet; and the Southern Ocean is increasingly used for fishing. Antarctica is not just useful for its incredible natural resources, but also is really useful for GPS systems. There are countless reasons for countries to want to own Antarctica. While it is unlikely anyone will quit the Treaty anytime soon, there is little hope that the countries involved will ever be able to fix the problems in the system. Perhaps it will become less relevant as it fails to challenge the problems!

This episode of Thinking in English has looked at Antarctica. Antarctica is a unique continent, full of natural resources and strategic benefits, and with no outright or official owner. While it was originally intended to be a land of free scientific research, peaceful practices, and international cooperation, this is being challenged by numerous issues. What do you think the future holds for Antarctica? I hope it stays a pristine natural environment, free from conflict. But I’m not sure how likely that is. How about you? What do you think?