104. What is the Autumnal Equinox?: The First Day of Autumn (or Spring) Explained!! (English Vocabulary Lesson) 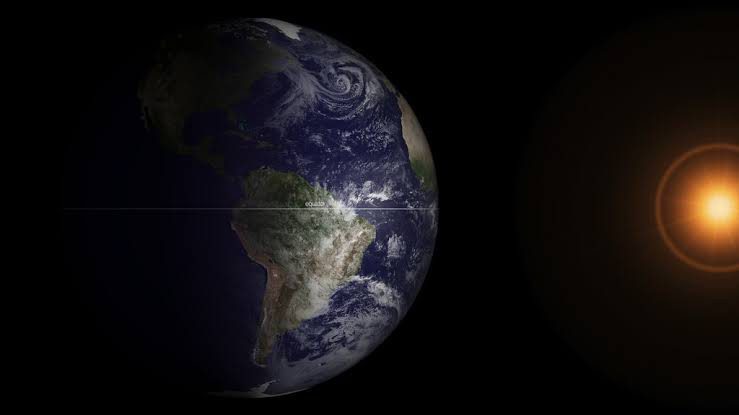 On Wednesday the 22nd of September the entire world will experience an equal amount of daylight and darkness. This is known as an equinox, and is celebrated by millions of people from different societies and cultures all around the world. This episode of Thinking in English will look at some of the scientific and cultural significance of the equinox, while introducing some interesting vocabulary!

17. Bonfire Night: A Unique British Festival With An Explosive History!

Hemisphere (n) – one of two halves of the earth, especially above or below the equator

Farmers has a good harvest this year

My house is built on a tilt

I caught a glimpse of the person who stole my car, but I can’t remember his face

The team persevered and managed to win the important game

If you are listening to this podcast within the first few hours of it being released, then it is currently the autumnal (or if you speak American English – ‘fall’) equinox. On Wednesday the 22nd of September the entire world will experience an equal amount of daylight and darkness. If you live in the Northern Hemisphere like I do, this is considered to be the beginning of astronomical autumn, and daylight will continue to shorten until the winter solstice in December. However, for the listeners in the Southern Hemisphere, it is actually the beginning of spring and daylight hours will get longer.

Why does the autumnal equinox matter? Well, for thousands of years cultures around the world have organised celebrations, rituals, and religious festivals around the movements of the sun and moon. The closest full moon to the equinox, known in English as the harvest moon, also has important symbolism and meaning for various peoples. The equinox also marks the changing of seasons – which is particularly important for people who live in countries far north or south of the equator. Hopefully, by the end of this episode of Thinking in English, you will know a little more about scientific and cultural meaning to this famous event.

Have you ever thought about why we have seasons or why the length of daylight changes throughout the year? I know I never did. Growing up in the UK, it just seemed normal for it to be dark at 4pm in winter, but also normal for it to be light until 10pm in the summer. It was only after living abroad in Japan, a country slightly closer to the equator, that I realised the variation in daylight hours actually changes around the world. But why does this happen? Well, there is actually one reason that the Earth has seasons, equinoxes and solstices, and changing daylight hours: the Earth spins on a tilted axis.

I assume that we all know the Earth spins – about once every 24 hours. The sun is not actually moving through the sky, but the Earth is rotating which creates sunrises and sunsets. However, the way the Earth spins is not the same all year – it is tilted. Some scientists believe that the tilt was caused by some massive object crashing into our planet billions of years ago. Due to the tilt, the North Pole faces the sun for half the year, and the other half of the year the South Pole faces the sun. Twice a year (in September and March) the amount of daylight and darkness is completely balanced! However, as our atmosphere actually bends sunlight slightly, there is always a little more daylight on our planet than darkness.

I already mentioned earlier in the podcast (and also in the title) that the equinox is the first day of Autumn. Is it really, though? The answer depends on where you are, and what type of scientist you ask! If you ask a meteorologist (a scientist who studies the weather), Autumn started on September the first. From the perspective of a meteorologist, summer is defined as the hottest three months of the year (so June, July, and August), winter is the coolest months (December, January, February), while the months in the middle are spring and Autumn. On the other hand, if you ask an astronomer (a scientist who studies the movement of planets, stars, moons, and other things in the universe), Autumn does begin today as the Northern Hemisphere now receives less sunlight than the Southern Hemisphere.

The literal definition of equinox is “equal night”: it is the day when day and night are completely equal, where almost the entire planet will have approximately 12 hours of daylight and 12 hours of darkness. Although, as I mentioned earlier, the atmosphere bends sunlight slightly which means that some places will have a little extra daylight. We measure the length of a day from the very first glimpse of the sun rising, to the last trace of it before it falls in the sky: this can add a few extra daylight minutes.

Interestingly, Earth is not the only planet in our solar system which has equinoxes. In fact, every planet spins on a tilted axis, which means they all have seasons. Mercury is only tilted very slightly, while Uranus is extremely tilted. However, the further away from the sun, the less common equinoxes and solstices are. Saturn, for instance, only has an equinox once every 15 years as it takes the planet around 29 years to orbit the sun!

For thousands of years, cultures and societies around the globe have understood that equinoxes and solstices were important: and they built monuments and organised celebrations around these times of year. Some of these festivals and traditions have persevered and are still celebrated in modern times!

For example, the ancient people of the UK, known as Celtic people, celebrated the movement of the sun with a series of celebrations called Sabbats. In the 1970s, an American author gave the September equinox the name Mabon, which is now used to describe this celebration in parts of the UK. Mabon is a time when pagans (the ancient religion of the UK) celebrate the summer, take part in harvest festivals, and welcome the dark winter months. One of the ways people celebrate Mabon includes building an altar with produce like fruits and vegetables – especially apples. Other people who choose to celebrate the equinox in the UK like to gather in Stonehenge (an ancient monument) to watch the sunrise. Gatherings happen at Stonehenge on each equinox and solstice.

While Stonehenge is an impressive place to watch the sunrise, perhaps the best place in the world to celebrate the equinox is at the ancient Mayan pyramid of Chichen Itza in Mexico. The buildings in Chichen Itza are organised according to the movements of the sun. This is not unique to Mexico, as many ancient societies did the same. However, the main pyramid, called El Castillo in Spanish, is designed in such a way that at the exact moment of the equinox, an incredible shadow forms on the stairs. This shadow looks like a “snake of sunlight” slithering down the pyramid.

In East Asia, and especially China and Chinese influenced societies, celebrate the September equinox as a Mid-Autumn festival or the Moon festival. Instead of focusing on the actual equinox, they celebrate the closest full moon to the September equinox. Like many other equinox festivals, the Moon Festival celebrates the summer harvest. In China, people celebrate by giving friends and family mooncakes – a pastry with fillings such as sesame seeds, duck eggs, or dried fruit inside. Mooncakes are actually an ancient snack, with early versions dating back 3000 years.

Also in East Asia, Japan has a Buddhist celebration called Higan which is celebrated at both the equinoxes. Japanese Buddhists believe the afterlife is located in the west, which is exactly where the sun sets during the equinox. It is a time to remember the dead by visiting, cleaning, and decorating their graves, and also to meditate and visit relatives.

There is one global festival that takes place close to the September equinox: the Christian festival of Michaelmas, also known as the Feast of Michael and All Angels. Although not a major festival, it is still celebrated by some Catholic churches. The reason I mentioned it, however, is that it is typical of many Christian festivals. Christian festivals tend to be at similar times to solstices, equinoxes, and other traditional pagan celebrations. Why? Well, some scholars believe that it was a method to attract pagan Europeans and to make it easier to convert to Christianity 2000 years ago. Think about it: Christmas is close to the winter solstice, Easter the Spring equinox, and many others are the same!

These are not the only celebrations around the world. In Lithuania people light candles during the Autumn equinox; in Poland people get food blessed by priests; Hindu people in India celebrate Navratri, a festival that lasts over several days.  I’ve probably missed many festivals around the world, so if your country or culture celebrates the equinox in some way, please reach out on Instagram and let me know!

This episode of Thinking in English has looked at the Autumnal equinox. I talked about what an equinox is, discussed the science behind the spectacle, before finally introducing some of the various festivals that take place around the world.  Have you heard of any other  fascinating September equinox celebrations? Or do you celebrate the September equinox in a special way? Reach out on Instagram and let me know!