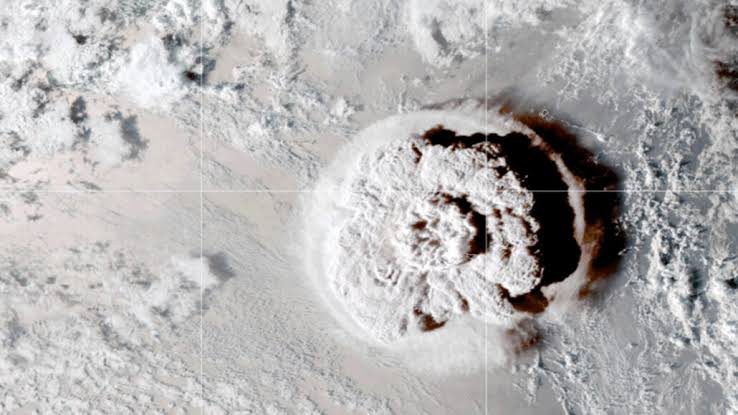 On January 15th, a massive volcanic eruption in Tonga sprayed lava, dust, and ash around the region and sent tsunami waves across the ocean. What is the situation in Tonga now? Why was the eruption so powerful? What will happen next? Let’s discuss it on today’s episode of Thinking in English!!

130. The Mystery Illness Affecting Western Diplomats!: What is Havana Syndrome?

128. Should Novak Djokovic be Allowed to Stay in Australia? (English Vocabulary Lesson)

Eruption (n) – the noun refers to a volcano exploding, shooting out hot rocks and burning substances

Ash (n) – the soft, grey or black, powdery substance left after burning something

You have to clear the ash out of the fireplace

To trigger (v) – to cause something to start

Caffeine can trigger headaches in some people

Devastating (adj) – causing a lot of damage or destruction

Lava (n) – the hot liquid the comes out of the earth through a volcano, or the solid rock formed when it cools

The volcano’s magma chamber is quickly filling up

Vaporisation (n) – process of turning, or causing something to turn, from a solid or liquid into gas

On January 15th 2022, the Pacific island nation of Tonga was rocked by a devastating volcanic eruption. A volcanic eruption so big that it sent a thick cloud of ash, dust, and smoke over 20km into the sky. People in New Zealand, thousands of miles away, reported hearing the volcano’s blast and shock waves were still spreading around the globe a week after the actual event.

Tonga is a country made up of 170 islands in the Pacific Ocean, and the Hungu-Tonga-Hunga-Ha’apai volcano is located only 40 miles (or 65 km) north of the country’s capital Nuku-alofa. Two hours before it erupted, the centre of the volcano collapsed beneath the sea, and two hours later it erupted with devastating power. Satellite images taken days after the eruption show that the majority of the volcano and its surrounding land has now disappeared.

The eruption also triggered an incredibly rare volcanic Tsunami. Usually caused by earthquakes or other major disturbances, a tsunami is an abnormally long, high or powerful sea wave. This Tsunami overwhelmed local islands, destroyed buildings, and forced residents out of their homes. Eventually, the tsunami waves were recorded as far away as Japan, Russia, the USA, Australia, New Zealand, and Chile. In fact, the first confirmed deaths due to the volcanic eruption were thousands of miles away in the South American country of Peru, where two people drowned while in the ocean.

What is the situation in Tonga now?

Since the eruption, getting information about the situation in Tonga has been incredibly difficult. Communication have been severely disrupted as the tsunami damaged the undersea cables connecting Tonga to the rest of the world. It might take weeks, even months, to finish the necessary repairs. Australia and New Zealand have now managed to land supply planes at the airport on the main island, and those two countries are also sending navy ships with aid. However, the situation in the hundreds of other more isolated Tongan islands is still unclear.

Currently, it is unknown how many people lost their lives in the natural disaster. In the hours before the explosive eruption, the volcano was causing hundreds of thousands of lightning strikes. Ash, dust, and rocks fell onto the neighbouring islands, and the tsunami rushed through villages and towns. Damage to villages, roads, and crops is also unknown. A particularly serious problem is likely to be water: many Tongan’s collect rainwater to drink, but this is now likely contaminated with the ash and dust from the eruption.

While the help of Australia and New Zealand is incredibly important, it also comes with risks. Tonga has only had one case of Covid-19 so far, which was caught before the person left the airport: there are concerns that international aid workers and support staff may also bring with them the pandemic.

Why was the Tongan Volcanic Eruption so Devastating?

The islands of Tonga sit within the ring of fire (although it is probably more accurate to describe it as a horseshoe of fire). Stretching from New Zealand, around to South East Asia and Japan, and then around the Ocean to Northern Russia, Alaska, Western Canada, and then down the West coast of the Americas to the south of Chile, the ring of fire is responsible for many of the world’s most devastating earthquakes, tsunamis, and volcanic eruptions.

Although the volcanoes of Tonga are not as tall as those found in Japan or Chile, they can be incredibly powerful.  The Hunga Tonga-Hunga Ha’apai volcano has erupted many times before. Beginning in 2014, an eruption produced so much ash and lava that it filled in the sea between two islands – in other words the eruption turned two islands into one! Eruptions last year made this island grow even bigger.

However, this island was also part of the reason this eruption was so powerful. It allowed for a much larger amount of magma to build up, and then escape from its chamber on January 15th. The combination of gases escaping and the instant vaporisation of huge amounts of seawater made this eruption so explosive.

However, the explosion of lava, ash, and dust was just part of the destruction. It was also accompanied by an underwater implosion. As the magma chamber emptied and its contents were fired into the sky, the sides of the chamber collapsed. It is likely that this collapse contributed to the creation of a tsunami.

What will happen next?

Will there be more eruptions? It is hard to tell. Researchers who have studied this volcano say that similar eruptions occurred a thousand years ago and two thousand years ago. However, these were not one single eruption, but multiple eruptions over a relatively short period of time. Experts are now scrambling to find out whether the volcano will start to fill up again with magma – but it’s not an easy task as communication and resources are scarce in the region.

What will happen to Tonga? About a quarter of Tonga’s 100,000 residents live in the capital city: the same city covered in ash and damaged by tsunami waves. One of the biggest problems caused by falling ash is the risk to crops. Ash can stick to plants which could cause them to die. The ash is also acidic – which means it can make water taste bad and cause stomach problems. Despite this, it is fortunate that the ash is not poisonous, so it is still possible to drink the contaminated water.

Sometimes massive volcanic eruptions can cause global cooling – but this didn’t happen after the Tongan eruption. This volcano didn’t produce much sulphur dioxide, which is the gas that can make global temperature fall!

In fact, the greatest mystery so far about the eruption seems to be why Tonga doesn’t have more damage. The country literally sits on the volcano. So far, 3 deaths have been confirmed but the smaller islands are yet to be checked, and dozens of houses were destroyed. However, this is quite good for a tsunami.

It has been suggested that increased activity from the volcano the day before the eruption gave people warning. Also, the eruption’s loud bang came before the tsunami, and allowed people to flee to higher ground. Perhap natural geography – things like reefs and lagoons in the oceans – may have protected parts of the country.

On today’s episode of Thinking in English I have tried to explain some details of the recent Tonga volcanic eruption. Although the situation is still unclear, it seems that most of Tonga has avoided the worst effects of the eruption. What will happen next? We are all hoping there will not be any more eruptions, but according to scientists past eruptions suggest things might not be so simple.

Have you ever experienced a natural disaster? Let me know in the comments!