9. More Vocabulary for the US Presidential Election!! 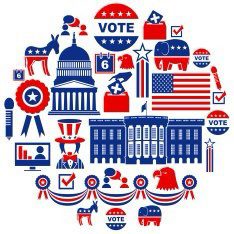 Linguists explore the nuances of language

There are three candidates standing in the election

She is a veteran campaigner for human rights

To nominate (v) – to officially suggest someone for an election, job, position, or honour

The primary election allocated all the delegates to Donald Trump

Representatives were elected by ballot

Obligated (adj) – morally or legally forced to do something

Battleground (n) – a place where an argument or competition is happening

Pennsylvania and Ohio are key battlegrounds in this year’s election

Today we will continue our series of episodes focusing on vocabulary surrounding the US Presidential election. There is now just over 2 weeks to go before we reach the climax of the battle between Trump and Biden, so this vocabulary might be incredibly useful in helping you understand some of the important details and specific nuances found in American politics. If you didn’t have the chance to listen to episode 6 of Thinking in English, I’d really encourage you to go back and have a listen. We looked at some of the most essential terms, including President and Vice President, Liberal and conservayive, and senate and House of Representatives. Today we will look at even more vocabulary that is closely related to the electoral process in the USA.

First up today is Ticket. You have probably heard of some of the other meanings of ticket (such as a train ticket), but did you know that ticket has an important meaning in US politics? Basically, a ticket is the list of candidates who are representing a particular political party or group in an election. Often we put the name of the political party before the word ticket, so in the USA you might hear talk about the Republican Ticket or the Democrat Ticket. Therefore candidates for the presidency and vice presidency are said to run on the same “ticket”. There are also a few other key terms that include ticket.

Balancing the ticket is when the presidential candidate chooses a vice-presidential candidate whose qualities balance out their weaknesses. The USA is a massive country, with an incredibly diverse population, and a huge political system. To cover as many different options as possible, political parties will try to balance their candidates. An old presidential candidate might choose a young Vice President. A Senator who spent their career in Washington DC might choose a State Governor. A candidate from California or the North East of the USA might choose a Southern Running mate. The idea is to make the ticket as diverse or ‘balanced’ as possible, to attract as many voters as possible. So for example, in 2008, Barack Obama, seen as young and relatively inexperienced, selected veteran Senator Joe Biden as his running mate. In the future, I guess that balancing the ticket will also begin to involve gender and race. An excellent example of this is the current Democratic Ticket for the 2020 election. Joe Biden,  a white male and an experienced old Senator from Delaware in the North East of the USA, chose Kamala Harris, a younger female from California with no experience as a politician in Washington and, importantly, a candidate with mixed African American and Indian heritage.

Split-ticket voting is a practice whereby individual voters spread their votes across multiple parties during an election. This type of voting occurs in elections in which more than one office is up for election. In the US election for example, every voter has the opportunity to vote for President, Vice President, the candidate for the House of Representatives, and also a Senator every 6 years, as well as more local elections. So if i decided to vote for the Democratic President and Vice President, but chose the Republican Senator and Congressman or women, I would be splitting my ticket! This used to be quite common in the USA, especially when the political parties were closer together in opinions, but has become less common in recent years

The next few vocabulary terms we will cover are connected to how a political party decides their candidates for an election. Although this process finished a few months ago, they are still talked about in more current news!

Let’s start with the primaries. They are a state-level election held to nominate a party’s candidate for office. They happen at different times in different states. In some states, voters are restricted to choosing candidates only from the party for which they have registered support, however 29 states allow open primaries in which any voter can vote. In this case, strategic voting may take place with, for example, Republicans crossing over to back the perceived weaker Democratic candidate.

Primaries first emerged in the early 20th Century, because it was decided leaving the nomination process purely to party bosses was undemocratic.

Primaries are not the only method of choosing a party’s candidate. Around 12 states use Caucuses instead, but the number is different according to the party. A Caucus is essentially a meeting of party members and activists at which they choose which candidate to back for the party nomination. In procedures that vary by state and party, participants in presidential caucuses meet in their local communities to choose which candidates they want to support.

The caucuses allocate delegates based on the level of that support. The results are then counted state-wide, and the candidate with the most delegates is said to win the state.

The National convention is the party assembly held every four years at which state delegates from across the country gather to nominate the party’s candidates for president and vice-president. The nominees are typically chosen by party voters in primary elections and caucuses well ahead of these conventions, but the formal convention processes remain in place in case the decision over the party’s candidate is very close or controversial. In 1924, a bitterly divided Democratic Party took 103 ballots to decide on their presidential candidate. The National convention is also a place where the candidates can make speeches, other politicians can support their party, and even celebrities can appear.

In the Democratic Party, these unpledged delegates are called superdelegates. They include senior members of the party and members elected to the Democratic National Committee, the party’s governing body.

Swing States are states in which the voters are relatively evenly split between Republicans and Democrats. This means that sometimes they support the Republicans, and sometimes they support the Democrats. Consequently, political parties often target and campaign in these states, and they can be really important to the election result. In recent elections, the most important swing states were Florida, Ohio and Pennsylvania. Those have a high number of electoral votes, making them prime battlegrounds during the election.

The final term for today is electoral college. What is an electoral college? Well, most people think that when they vote in the US election they are directly voting for the President. But that is not true! In fact, in 2016 Hillary CLinton received more votes than Donald Trump, but still lost. How could this happen? It is because the USA does not have direct elections for the President, but instead uses the electoral college. This is the collective term for the 538 electors who officially elect the president and vice-president of the United States. Each state is given a number of electors, the number of electors for each state is equal to the combined total of its senators and representatives in Congress. The votes for president are counted in each state, and the person with the most votes receives the electoral college votes. So for example, if Donald Trump wins 51% of the vote in Texas, he will receive 100% of Texas’ electoral college votes. Presidential candidates require a majority of 270 college votes to win the presidency. Two states, Nebraska and Maine, now divide their electors in proportion to the popular vote given to each candidate.

In this episode we have looked at some very important vocabulary regarding the US elections!! Now, when you hear or read about tickets, primaries, or the electoral college you will understand a little better!! How about in your country? How are candidates for elections decided? Do you have primaries? Or are they decided in a different way? Moreover, how do you vote for President? Are there direct elections? Or, like America, do you have an electoral college? Or maybe like the UK you don’t get to vote for the leader? People have debated for hundreds of years about what is the best system for choosing leaders.

Q. Joe Biden was a Senator in which state?

Q. How many electoral college votes does a Presidential candidate need to win?

Q. True or False? If i vote for a Repbublican President and a Republican Senator, i am split ticket voting