144. Should Students Have to Wear School Uniforms? (English Vocabulary Lesson) 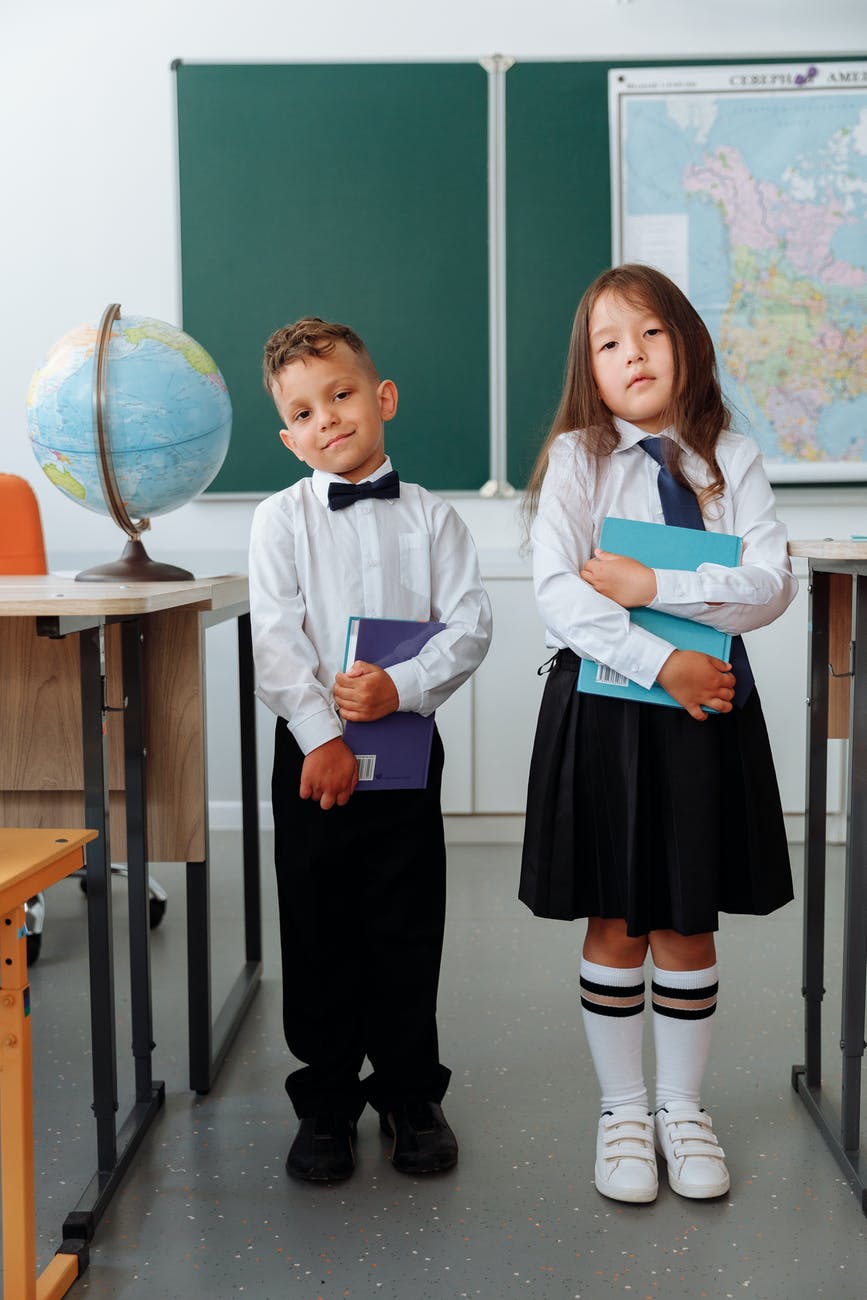 On today’s episode of Thinking in English, let’s investigate the debate over school uniforms. Are uniforms a way to make school safer and more equal? Or are uniforms stopping children from being individuals and have no effect on academic performance?

143. What is a War Crime? (English Vocabulary Lesson)

142. What is an Oligarchy?  (English Vocabulary Lesson)

Peculiarity (n) – something that is typical of one person, group, or thing

The soldier wore full uniform on his wedding day

Sixth-form (n) – in Britain, sixth-form is the part of a school for students aged 16-18

When I was at sixth-form, I studied Maths, History, and Politics

Mandatory (adj) – something that is mandatory must be done

It is mandatory to wear seat belts in cars

The intruders entered the house through the window

She was distracted by her phone throughout the dinner

To enhance (v) – to improve in quality, amount, or strength of something

Freedom of expression is considered a human right

Although almost all of my listeners are long past their school years, you have all been to school when you were younger. And some of you probably have children (or even grandchildren) who are currently school age. When you think about school, what do you remember?

For me, I remember being bored in my high school French classes, realising I was quite good at maths, playing football every lunch with my friends, and going to the local shop to buy snacks in my final year of school. Some of you might have similar memories to me, but most of you will have very different school experiences. Different countries, types of school, generations, and education systems all have features and peculiarities.

So, what do you remember? And, more related to today’s episode, what were you wearing? I had to wear a school uniform from the age of 4 until I was 16 (and then my final two years at sixth-form had no uniform requirement). And in the UK, this is very common.

British schools have had uniforms for hundreds of years and virtually all schools have a required uniform. Usually, elementary schools require children to wear a school jumper (or sweater if you prefer American English), a polo shirt, and black/grey trousers, shorts, or skirts. Secondary school students usually wear more formal clothes such as a jacket, tie and formal shirt. It is very rare to find a school with no uniform for all students (although many schools allow sixth-form students to wear their own clothes).

But why do we wear uniforms? And should we still make student’s wear uniforms? The UK is not the only country with uniform requirements – all over the world children’s uniforms are found in certain schools and countries. However, in other places like the US, it is rare to find a school with a uniform.

As some of my regular listeners will know, I used to be an elementary and junior high school teacher in the Japanese countryside. And Japan has some of the strictest uniform rules in the world. The colour of children’s underwear is regulated, hairstyles and hair colour is checked, and in many schools the uniform doesn’t change with the seasons. I will always remember teachers measuring girls’ fringes (or bangs in American English) with a ruler and elementary school children looking so cold as they walked to school in their shorts and skirts.

However, from next month some Japanese schools, including 200 in Tokyo, are loosening some of the rules for the first time in many years. And around the world, there is a debate over whether school uniforms are actually necessary. Some argue that uniforms make schools safer, more equal, and less distracting. Others argue that uniforms stop children from showing their creativity and individuality and don’t affect behaviour or academic achievement.

So, in the rest of this episode I am going to introduce two different sides of the debate – should students have to wear school uniforms? I want you to listen to the arguments I make, then decide for yourself your own opinion. Think critically in English about what I say! Then let me know what you think. You can also check some of my other debate episodes (I’ve done quite a few)!

Should Students Have to Wear School Uniforms?

First, proponents of school uniforms argue that they can deter crime and make schools safer. Data from the US, a country known for not having uniforms, has shown that introducing uniforms reduces crime. For example, after Long Beach California introduced mandatory uniforms, reports of violence and crimes like weapons possession, drug possession, assault, and vandalism all decreased.

Uniforms can make it harder for students to hide weapons on their body, make intruders or outsiders obvious on school property, and help schools keep track of their students outside of school. School uniforms also prevent students from displaying gang colours and signs – which is a real problem in some countries.

Another argument proponents make is that school uniforms can make students more  focused on their education. Rather than being distracted by clothes and what they are wearing, the fact everyone has to wear the same thing removes the distraction.

Personally, I remember always being stressed about what to wear on the one or two days a year the school allowed non-uniform (usually for charity). So, I can’t imagine what it would be like everyday. Evidence actually supports this – the University of Houston released a study showing that girls’ language tests improved after uniforms were introduced.

One of the major arguments in support of school uniforms is that uniforms not only help stop distractions, but also peer pressure and bullying. There is no competition over who has the most expensive, most fashionable, or most desirable clothes. In many ways, uniforms are seen to hide the inequality between students.

Moreover, it is possible that school uniforms can save parents money. Rather than a number of different outfits, students are limited to one simple set of clothes. Estimates from the UK suggest that uniforms cost around £88 on average (including shoes) while non school outfits are on average over £100.

And finally, proponents of uniforms often argue that uniforms enhance school pride, unity, and spirit. Uniforms may help students feel part of a community, increase their care for the school, and make children feel more important. They also can improve attendance and discipline

Students SHOULD NOT Wear School Uniforms

On the other hand, opponents of school uniforms tend to argue that uniforms restrict students’ freedom of expression. In some countries, such as the US, it is written in law that everyone has the right to freely express themselves. In Sweden, uniforms have been described as a human rights violation as “dress and appearance should be considered an individual expression, decided by the students themselves.”

Similarly, school uniforms force students to conform and look similar, even if they want to be individuals and express their own desires. In recent years, this has been most obvious in the uniform requirements of transgender and gender-nonconforming students who might not feel comfortable wearing a male or female uniform. Wearing their own clothes, with their own style, removes this stress.

Moreover, evidence does not necessarily suggest that school uniforms improve attendance, academic preparedness, or exam results. Some studies have found that uniforms have no significant effect on reading or mathematics grades, while others tend to see a negative reaction to uniforms.

Although proponents argue that school uniforms help stop bullying and violent attacks, opponents of school uniforms argue that this is not the case. While some schools reported improvements in behaviour, others did not. For example, one Miami school district reported that fights in middle schools doubled one year after the introduction of mandatory uniforms

Finally, opponents of school uniforms contend that uniforms actually emphasise the socio-economic divisions they are supposed to stop. Uniforms can not hide the difference between the poor and the rich, the haves and the have-nots. For example, richer students will have newer and more uniforms, while poorer students often wear older or second-hand clothes. Uniforms are also an extra expense for parents!

What do you think? Should students have to wear school uniforms? Did you need to wear a uniform at school?

3 thoughts on “144. Should Students Have to Wear School Uniforms? (English Vocabulary Lesson)”

3 thoughts on “144. Should Students Have to Wear School Uniforms? (English Vocabulary Lesson)”