93. Why Do We Need Passports to Travel?: A history of the passport! (English Vocabulary Lesson) 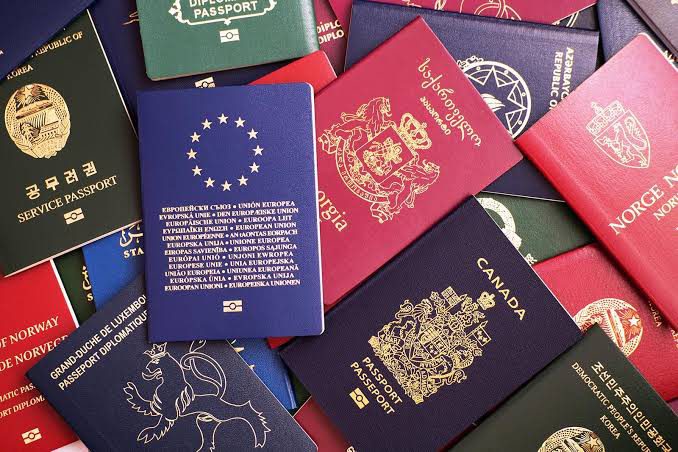 If you want to travel abroad, you need a passport. But why? Why do we need these little documents to leave our own country? When was the first passport used? When did modern passports develop? What is the future of passports? Let’s try to answer these questions on this episode of Thinking in English!

(If you can’t see the podcast player CLICK HERE to listen now!!)

The letter never reached its destination

The war was followed by a period of peace and prosperity

Prophet (n) – a person who speaks for God or a god

Jesus is considered a Prophet by Christians

He is credited with inventing the the TV

Venice was once an important maritime power

To embed (v) – to fix something firmly into something

Computer chips are now embedded into all sorts of technology

Ignorance (n) – lack of knowledge, understanding, or information about something

Public ignorance about the disease is still a cause for concern

One of the consequences of the Covid-19 pandemic is that international travel is now significantly more difficult. Most flights have been cancelled or are now running on a very reduced schedule. If you can find a flight, you also have to make sure that your destination will actually let you in! It took me almost a year to be able to get a visa to Japan, and the majority of foriegn nationals still cannot enter this country. Other countries require numerous Covid-19 tests, periods of quarantine in government facilities or hotels, and confirmation of whether you have vaccinated yet.

Covid vaccination passports are likely to become a big feature of international travel in the coming years. There have been numerous debates over whether these kinds of regulations are fair and should be required. The second part of this episode will look at Covid passports in more detail. But these debates made me think of a more fundamental question: why do we need passports at all? It is not something we usually question: of course we need a passport to travel to another country. But why? Passports haven’t always existed, so how did they start? When did they start? And why do we need them?

In the modern day, passports are an essential object for foreign travel. At a basic level, they are a document including details such as your name, date of birth, address, and photo. These are used to confirm your identity and the details are entered into online databases whenever you enter or leave a country. At a deeper level, passports can symbolise freedom, be a source of national pride, allow an individual hope, safety, and prosperity, and even give you protection. Passports are issued by a government, and allow holders to travel under the protection of that government. Some passports allow you to freely travel to hundreds of countries, while other passports make international travel complicated and expensive.

The history of passports is long and complicated. While the concept of protecting travellers probably existed since the earliest kingdoms and societies, the first known mention of something similar to a passport comes from the Bible. In one of the books, a prophet called Nehemiah was given letters from the King asking other leaders to protect him while traveling.

British King Henry V is often credited with inventing the first modern passport in 1414. He issued “safe conduct” documents to both English citizens and foreign nationals allowing them to travel freely and safely. From 1540, the job of giving passports was no longer the king’s responsibility but the British government in general. This was also around the time ‘passport’ was being used to describe such documents. There are two main theories for the origin of the word passport: one is that it comes from people passing through maritime ports, and the other theory is that it comes from people passing through gates in city walls (which are known as “portes” in French).

However, passports were not generally required for international travel until the beginning of the 20th century. It was also at the beginning of the 20th century that truly modern and recognisable passports were developed. The first modern British passport in 1914 included a photograph, signature, and a personal description which described people’s facial features. Other countries also developed modern passports, and a League of Nations agreement in 1920 caused members to standardise their documents.

Most countries’ passports tend to be quite similar, but there are some interesting quirks around the world. There are only four colours for passports: a shade of red, blue, green, or black. According to some sources, the Philippines passport is the hardest passport to fake or reproduce: it has embedded computer chips, special paper that is almost impossible to copy, and other secret features. Some countries allow people to have more than one passport. I have friends who hold both British and Irish passports, or British and French passports. However, many countries force their citizens to choose one passport, one country, which I think is unfair to people who may live international or multicultural lives.

Passports can also be strong or weak; the stronger your passport, the more countries you can visit without visas. According to The Henley Passport Index, Japan has the strongest passport allowing access to 193 different countries and territories. Other countries with the strongest passports include Singapore, South Korea, and Germany. At the other end of the scale, Syria, Iraq, and Afghanistan are considered the countries with the weakest passports. However, we need to give a special mention to Israel’s passport, which is ranked the 23rd strongest in the world, but is completely refused and not accepted by about 12 countries. Moreover, Iran, Kuwait, Lebanon, Libyan, Syria, and Yemen refuse entry to anyone, no matter what passport, if there is evidence they travelled to Israel in the past!

It is now increasingly likely that in the near future international travel, or at least convenient international travel, will require a vaccine passport. This will be an official document confirming that you have been vaccinated against Covid-19, and also confirming which vaccine you used (this is because some vaccines are better, or more trusted, than others). However, unlike a traditional passport, the vaccine passport may also be required for attending certain events, entering certain public spaces, or participating in activities. In some parts of the world, music concerts and sporting events already require vaccine records or negative Covid tests.

There is a lot of discussion whether vaccine passports are fair. Many people don’t want to have a vaccine. Does this mean they will not be allowed to travel abroad, or attend events? Other people cannot have vaccines due to allergies or other medical problems. Will we make exemptions for them? I think the bigger issue is the gap between rich and developing countries. While every adult in the UK has been offered the vaccine, and over 90% of people have been vaccinated at least once, the same is not true about other countries. Vaccines are not as accessible or easy to access in much of the world. Is it fair to stop people entering your country if they have no chance of getting the vaccine in their hometown?

This episode of Thinking in English has looked at the history and purpose of passports, I then briefly discussed the possibility of vaccine passports. Now, I want to end this episode with a little thought experiment!

Should people who are opposed to vaccines, or unable to be vaccinated, be excluded from international travel and other events that might require a vaccine passport in the future?

One way of trying to answer this question is by using the philosopher John Rawls’ concept of the “veil of ignorance.”  The idea is to forget everything about yourself, and then try to answer the question. If you are morally against vaccines, you need to forget your objections before answering the question. If you are already vaccinated and very enthusiastic about it, you should also forget everything you think and feel. Then, try to think about what would be best for society as a whole. Not what is best for you personally, but what is best for society in general. Considering the harm caused by the pandemic and the evidence of vaccine’s success and safety, I would argue that the vaccine passport seems very appealing from the “veil of ignorance” position. But I want you to try the thought experiment yourself! What do you think? Should we have vaccine passports?

Check out our recent episodes!