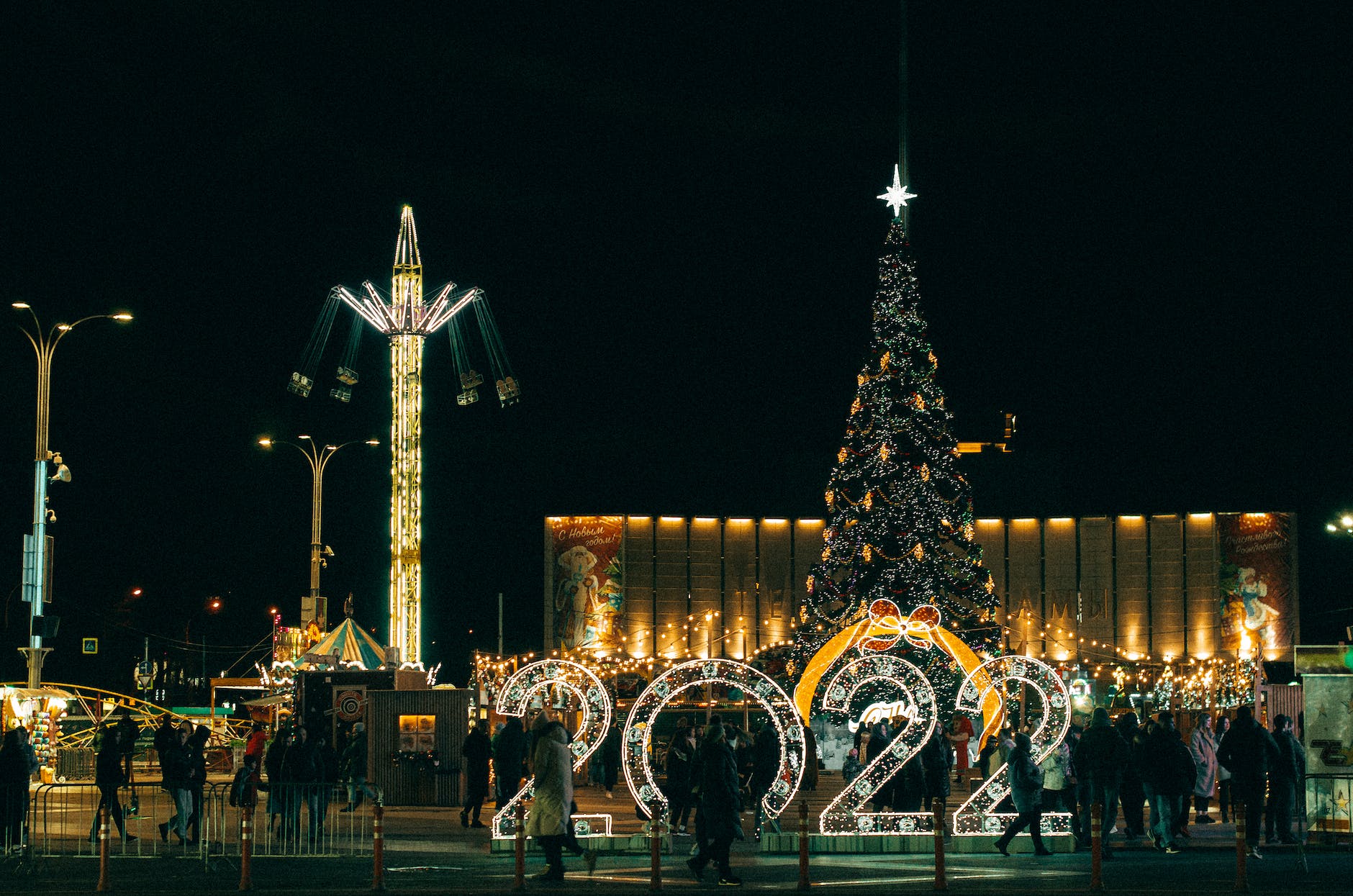 What happened in 2022? How much do you remember about the previous year? Today I’m going to go through every major event that occurred in 2022! Listen, learn, and practice your English!

Just quickly before I start… I just want to mention that I have recorded episodes on around half of the events I’m going to mention in this episode! I’ll link everything in the transcript – so go over there to find out more details about these events!

The year started on Jan 1st when the state funeral for Archbishop Desmond Tutu was held, one of the most influential South Africans and famous anti-apartheid activists.

Jan 5th saw Kazakhstan declare a state of emergency across the country. 164 people died after protests erupted – people were furious at increases in fuel prices and the government.

On Jan 6 Novak Djokovic, the world number 1 Tennis player, had his Australian visa cancelled after lying about his COVID-19 vaccination. He was deported a few days later.

The pacific country of Tonga was hit by a tsunami on Jan 15th after the underwater volcano Hunga-Tonga Hunga-Ha’apai violently erupted – the explosion could be heard all the way in New Zealand!

On Jan 18th Indonesia voted to move their capital city to the island of Borneo and call it Nusantara!

Moving on to February, the Winter Olympics officially opened on Feb 4 in Beijing, China – a city which rarely experiences snowfall!

A few days later on Feb 24 Putin announced the start of a “special military operation” in Ukraine to “demilitarize” the country. Russia invaded Ukraine by land, air and sea, bombing major cities but being met with fierce Ukrainian resistance and international anger.

By Feb 27th, the Russian invasion of Ukraine had led to 18 million Ukrainians being displaced with four million refugees leaving the country

On Mar 8, Florida passed a controversial law known as the “Don’t Say Gay” bill which attempted to restrict what teachers could discuss in classrooms

The South Korean elections took place on March 9th, with conservative Yoon Suk-yeol being elected as the new President of South Korea

Also on March 27th China announced that Shanghai would enter lock down. 25 million people began COVID-19 testing and quarantining in one of the harshest lockdowns in the world!

After months of hard fighting, Russia was forced to retreat from the Ukrainian capital on March 29th after its army was suffering badly!

On Apr 1, the president of Sri Lanka, Gotabaya Rajapaksa, declared a public emergency due to violent protests. The country was experiencing its worst economic crisis since independence.

Ketanji Brown Jackson became the first black woman to be chosen as a US Supreme Court judge on April 7th.

And on Apr 25th, Elon Musk reached a deal with Twitter to buy the company for $44 billion!

Sinn Féin, an Irish republican party, won the most seats in Northern Ireland elections on May 5th – the first time they had ever achieved this result!

On May 12th North Korea ordered a national lockdown after apparently announcing the first ever COVID-19 cases in the country. Experts doubt that they were the first cases and feared for the 25 million unvaccinated people in the country.

In mid-May, both Finland and Sweden announced they will apply to join NATO following the Russian invasion of Ukraine – both countries had been neutral for decades (Sweden for centuries)

On June 1st, Turkey officially changed its name to Türkiye.

In a momentous decision, the US Supreme Court overturned the Roe v. Wade decision on June 24th, ending the constitutional right to an abortion.

On June 25th, Japan recorded its highest-ever temperature (I was in Japan… and it was ridiculously hot!)

198. Who was the Richest Person in History? (English Vocabulary Lesson)

197. What is Imposter Syndrome and How to Overcome it?

Moving into July, Germany and Nigeria signed an agreement on July 1st to return over 1,000 Benin Bronzes back to Nigeria

Sri Lanka announced it had less than one day’s worth of fuel left in its supplies on July 3rd, forcing them to close schools and stop public transport

On July 6th 40 government ministers, officials, and aides resigned from the British government in just 24-hours. Prime Minister Boris Johnson was forced to announce his resignation a day later!

Former Japanese Prime Minister Shinzō Abe was shockingly assassinated on July 8th while giving a speech in the city of Nara.

Extreme heatwaves hit Europe starting around July 19th. Temperatures hit 40°C in parts of the UK for 1st time ever; over 1000 people died in Portugal and 500 in Spain; and wildfires spread across Spain, France, Italy and Greece

US House Speaker Nancy Pelosi became the most senior US politician to visit Taiwan in 25 years at the beginning of August- sparking anger and a strong reaction from China.

On Aug 8 the FBI searched former US President Donald Trump’s home in Florida after accusations he mishandled classified government documents.

Inflation kept getting higher in August – the UK inflation rate reached a 40-year high of 10.1 per cent on August 17th.

Soon after, the UN announced that 22 million people were now at risk of starvation in Horn of Africa after the worst drought in 40 years

Pakistan was hit by massive floods and monsoon rains on Aug 28 – the death toll rose to over 1,000 people

Liz Truss was chosen as the next Conservative Party leader and UK Prime Minister on September 5th.

Massive protests began across Iran on September 17th over the treatment of women, triggered by the death of Mahsa Amini, a 22-year old who died after being arrested by the morality police

On September 19th, the funeral of Queen Elizabeth II was held at Westminster Abbey in London with at least 500 world leaders in attendance

Vladimir Putin drafted between 300,000 and 1.2m men to fight for Russia in Ukraine on September 21st, causing demonstrations and protests around the country

However, as October began, the Ukrainian military were already defeating Russian forces and forcing them to retreat away from the areas just annexed by Putin.

On October 8th, the Kerch bridge connecting Crimea to Russia was partly blown up causing major problems for Russia’s military in the area

On October 23rd, Chinese president Xi Jinping was confirmed as leader of the Communist Party for another term (coming after he changed laws around term limits for leaders)

On November 11th, Crypto currency exchange FTX filed for bankruptcy – leaving thousands of customers out of pocket and billions of dollars missing!

The world’s population reached 8 billion on November 15th, 11 years hitting 7 billion. The UN expects we will reach 9 billion in 2037!

The results of the UK census were announced on November 29th, revealing that fewer than half of people in England and Wales currently call themselves Christian

On the same day, Donald Trump’s company the Trump Organization was convicted of tax fraud in New York

Peru experienced a political crisis on December 7th. The president Pedro Castillo attempted to dissolve Congress before they could impeach him for corruption.

On December 8th the American basketball star Brittany Griner was exchanged by the US government for Russian arms dealer Viktor Bout, known as the “Merchant of Death”

New Zealand officially passed the world’s first tobacco ban on December 13th – meaning anyone born after 2009 will never be able to buy tobacco!

And on December 18th, Lionel Messi led Argentina to victory over France to win the 2022 World Cup in Qatar!

A lot happened in 2022 – and the events I mentioned today were only a handful out of all the major international crises and news stories!

Please let me know what stories I missed! There were more elections, natural disasters, coups, and much more across the world. And make sure to check out the transcript of this episode – you’ll find links to full episodes on most of the events of the past year!

What did I miss? What events were the most significant this year? Did you forget about any events I mentioned? What do you think will happen next year?